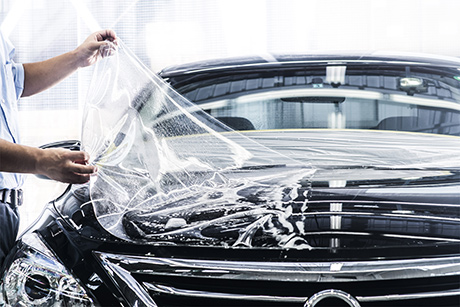 A Brief of the Car Paint Protective Film From Its Origin

Paint protection film (PPF) is commonly known as invisible car clothing, transparent car protective film or car body film. PPF is made of self-healable thermoplastic polyurethane and can be installed on the painted surface of new or used cars to protect the paint from stone chips, insect splashes and minor scratches. The material of the paint protection film is also used in aeroplanes, Recreational Vehicles (RVs), mobile phones, electronic products, screens, motorcycles and many other fields.

When new vehicles are leaving the factory, some automakers will selectively install partial paint protection films in high-impact areas of the vehicle, such as the rear arches. In professional retail stores, the installation of the membrane is usually carried out by certified and trained professionals.

1. The Origin: from the Military

Like many other consumer products, the paint protection film was originally developed and used by the military. During the Vietnam War, helicopter rotor blades and other sensitive parts of military transportation vehicles were often damaged by shrapnel and debris. To protect these moving parts, the US military urged 3M company to provide a light and unnoticeable protective solution. Finally, 3M has produced a transparent film made of polyurethane (PU) material to be attached to the wing blades for protection.

In fact, compared to having to replace or repair damaged rotor blades, the advantages of replaceable films are already obvious, whether in terms of manpower, materials, or time costs. Neither will the use of this film have the slightest impact on the flight speed of the US military. Therefore, although automobiles have become the primary application of paint protection film now, some people in the industry still call paint protection film “the helicopter tape”, but this term is becoming less and less used.

2. Use of paint protection films in the Racing Era

Until today, the paint protection film is still widely used for military purposes while 3M is still producing a variety of aviation films and military films. However, as time passed, the automobile industry began to notice the protective effect of paint protection film. Although it could not be used directly, paint protection film was quickly adopted by racing drivers after some revisions. In fact, the original film too thick and hard to be applied to racing cars. PPF was originally designed to prevent the blades of helicopters from corroding in the harsh sandy environment, and the blades of the aircraft are flatter and less complex than the surface of the car, so the film does not need to be highly flexible and compliant.

Contemporary car PPF has a high degree of adaptability and optical transparency, thus can be provided in a variety of thicknesses (in mils in the United States) and colours. The new product is multi-layered and can provide a self-healing coating that can reform itself after scratches or scrapings and maintain transparency for over ten years. Some paint protection film products also have hydrophobicity similar to ceramic coatings.

The application of modern paint masks also requires a specific installation solution or gel as a barrier to prevent the film from permanently adhering to the car paint panel. The installation of some customized and advanced paint protection film on complex surfaces necessitates the aid of a steam/hot air gun. Film pre-stretching and pre-forming can be used for complex wrapping and bending.

4. Installation of the paint protection film

The installation method of paint protection film can be generally divided into machine cutting and hand cutting.

The machine cutting method is facilitated by a specialised computer-operated machine. The computer system in the computer contains the size data of various parts of various models, and the film cutting machine can be connected and the data will be transferred. For different car models, parts and shapes the film will be cut out accordingly and then installed by trained staff on the corresponding parts. Hand cutting method is to roughly cut a large piece of the PPF and then install the whole piece of film on each part of the car. The PPF will be stretched, aligned and cut carefully to fit the shape of the part.

If you want specific details on vehicle paint protection, give us a call today or visit our page Paint Protection Film! We look forward to working with you to assist you with your vehicle wrap.

Concept Wraps provide all forms of vehicle wrapping services. Contact us today to get the best graphics and wrapping services for your vehicle. Find out more of our wrapping works in our Instagram and gallery.