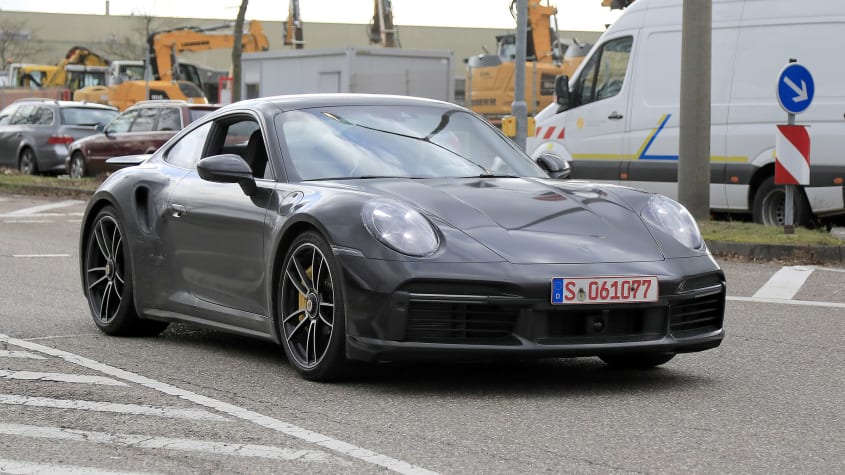 The Porsche 911 Turbo S has been spied testing before its long-awaited official reveal at the 2020 Geneva motor show. We’ve seen prototypes of the Turbo and Turbo S on the public road since early 2018, but finally Porsche’s most potent 992-generation 911 so far is nearly ready to be revealed.

As detailed in a previous prototype passenger ride, we now know the new 911 Turbo and Turbo S will be powered entirely by internal combustion means, free of any form of hybridisation. Instead, the new Turbo models will be powered by a new 3.8-litre twin-turbocharged flat-six engine that is bespoke to the new Turbo, and not a revised version of the previous 3.8-litre unit fitted to the 991-generation cars.

Loosely based on the MA2 3-litre unit found in the standard Carrera and Carrera S models, the engine’s power will rise in the most potent Turbo S to near-650bhp, 78bhp up on the previous Turbo S and only 40bhp less than the last GT2 RS. Torque is also up to around 590lb ft, which together with the eight-speed PDK dual-clutch transmission and all-wheel drive system should shoot the new Turbo S to 62mph well inside the 3sec bracket.

This is despite the new 992’s expected weight gain, which could see it breach 1700kg in certain specifications. To try and combat the extra weight, the Porsche’s mixed-metal body-in-white is actually lighter than that of the previous model, the extra weight instead coming from the 992’s new drivetrain hardware and the extensive particulate filters required to keep the new engine within tough EU emissions regulations.

As with all 911 Turbos since the 996, the 992-generation car will feature a wider body than the standard Carrera, defined by the side-mounted intakes and enlarged front intakes. The stacked rear wing isn’t quite as prominent as on the previous model, and lacks the wide active section. Instead it utilises a small active plane that rises at speed to enhance stability.

The yellow calipers and centre-lock wheels signify this prototype’s likely Turbo S status, while the two oval exhaust outlets also point to this model as being fitted with an optional sports exhaust – standard models will swap these out for four oblong outlets.

Many of our queries where the new Porsche 911 Turbo is concerned will be answered when the car is revealed in the coming weeks, before sales commence later this year. Our burning question of whether the Turbo versions of this more GT-oriented 992 911 will offer enough of