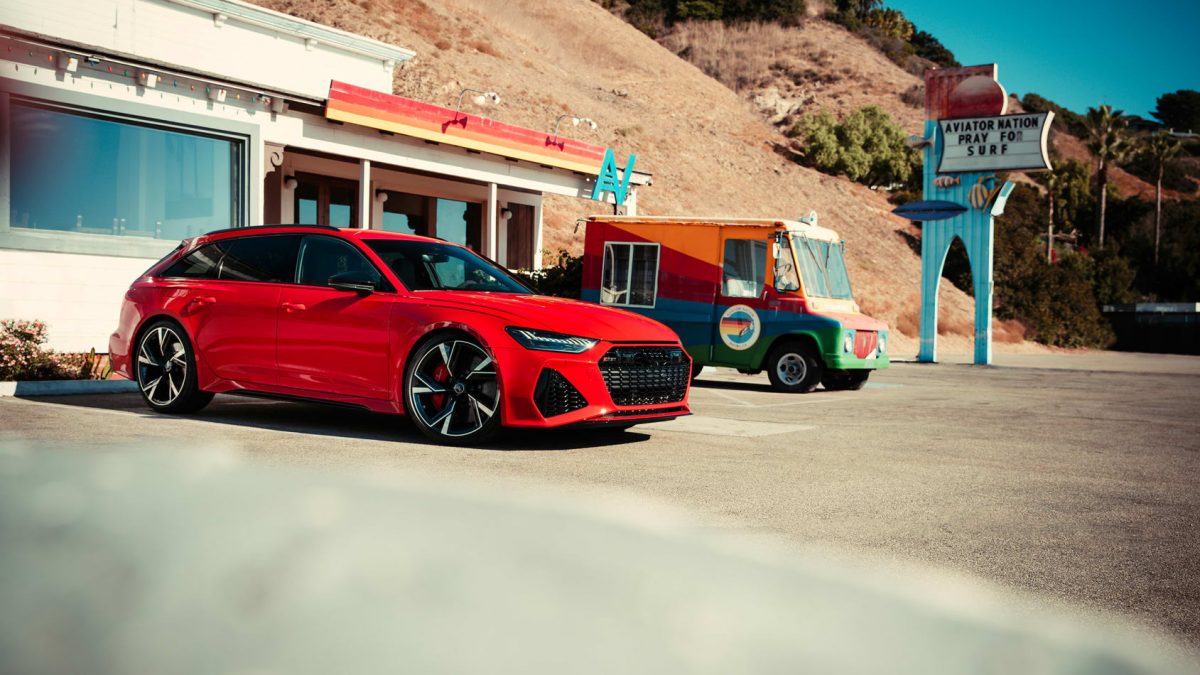 The Audi RS6 has long appealed on its deeply desirable complement of attributes. Does this all-new model mess with the formula, or just build on its excellent predecessor?

Audi’s RS6 has often laid claim to the ultimate daily-driver performance car, melding brute force with all-weather traction, comfort, space and the kind of sporty estate styling that presses all the right buttons whether for car enthusiasts or simply those interested in the prestige of Audi’s ultimate wagon. This new version, based on the 8th generation Audi A6, once again features a twin-turbo V8 mated to an automatic transmission and four-wheel drive, but utilises a raft of modern chassis technology to deliver even more performance and all-round capability.

More boost and bigger turbos means this version of the 4-litre V8 is now churning out 592bhp and 590lb ft of torque, which lets face it, should be more than ample. From the opposing perspective, a 48v mild hybrid system and cylinder deactivation enable a small improvement in the average fuel economy – as long as that is, you’re not greedy with the throttle. The only gearbox offered is the ubiquitous eight-speed torque converter, with manual control via paddles or the gear selector, and drive then sent to all four wheels via a Torsen centre differential that runs a 40:60 torque split, front-rear, in normal running, but can put up to 70% to the front or 85% to the rear in certain situations. All UK RS6s get the rear Sport differential as standard fitment, which features torque vectoring not via the brakes but by over-speeding the outer rear wheel on cornering, aiding turn-in and reducing understeer.

The figures suggest the RS6 is more than fast enough, its official 0-62mph listed as just 3.6 seconds and 124mph (200km/h) disappearing in just 12-seconds. The top speed is limited to 155mph as per usual; however, that limiter can be raised to 174mph for a price, and even further to 190mph if the £9,200 carbon ceramic brakes are optioned.

A rear wheel steering setup is standard on UK cars, bringing up to 5 degrees of lock on the rear axle in the opposite direction to the fronts at low speed, and up to two degrees in the same direction above 62mph. On such a big car, it should enhance agility while aiding stability.

The standard RS6 comes with an Audi Sport development of the A6’s air suspension, with a two chamber setup and lower ride height. It offers self-levelling and a low-speed raised ride height setting for poor surfaces, plus the usual Auto, Comfort and Dynamic settings via the Audi Drive Select setup, which also controls all of the other usual parameters from steering to exhaust noise. However, in the UK the top-spec Vorsprung model has Audi’s DRC suspension, which consists of a more conventional combination of coil spring and adaptive damper, but mated with a system that links diagonally the dampers with hydraulic fluid. DRC is also available as a £1,300 option on ‘lesser’ RS6s. According to the Audi Sport engineers present on the car’s launch, the DRC is the more sporting choice, the air a better one for comfort. With the standard wheel size being 21”, and a 22” rim the option, ride quality may be a hot topic.

Finally, the 48v system enables not only faster re-starts when the stop-start system is active, but also a coasting function with either the engine at idle or off completely, depending on various parameters.

First impressions of the RS6 are of its refinement more than anything else. While the V8 fires up with a flourish, it soon settles down to a quiet idle, and with all the interior amenities and comfort of a regular A6, plus double glazed windows, it’s a strikingly easy way to just knock back the miles. There’s plenty of room over the shoulder though. Even the ride quality on 22” wheels seems perfectly reasonable, although the majority of road surfaces are smooth at our US test location.

However, this is a 190mph estate car and hence the temptation to give the V8 a workout is irresistibly strong. It doesn’t disappoint, yet it’s fair to say it’s the least remarkable aspect of the RS6 package: that’s not because it’s underwhelming, just that it propels the RS6 in exactly the way you’d expect a near-600bhp V8 to do so. Acceleration is immense, swelling from very low revs and with the punch staying the course all the way through the rev range. If the sports exhaust is fitted there’s a purposeful roar and thud too, although it’s in no way a wild extrovert like, say, and E63 S AMG.

I drive a DRC-equipped car first, and it immediately impresses. The steering is light, but the latest generation of power assistance software from Audi Sport has taken a significant leap forward, and it’s free of artificial weight when you ramp up the modes. Turn-in on corner entry requires very little input, and while the dusty roads are clearly causing the front Pirelli P Zeros some problems in outright grip, the RS6 steadfastly refuses to understeer, much preferring to be balanced on a throttle and even oversteering slightly on a corner’s exit. For such a big, heavy car, the tactility, balance and sheer enjoyment of hustling it along is seriously impressive – and a surprise. By comparison an air suspension-equipped car can’t reach the same heights: the ride may be a little softer, but even then it stumbles over sharp ridges and similar intrusions in the road, and the steering and chassis responses lack the precision of the DRC car. It’s as though there’s an extra layer of stodge to the RS6’s dynamic repertoire. I know which setup I’d go for.