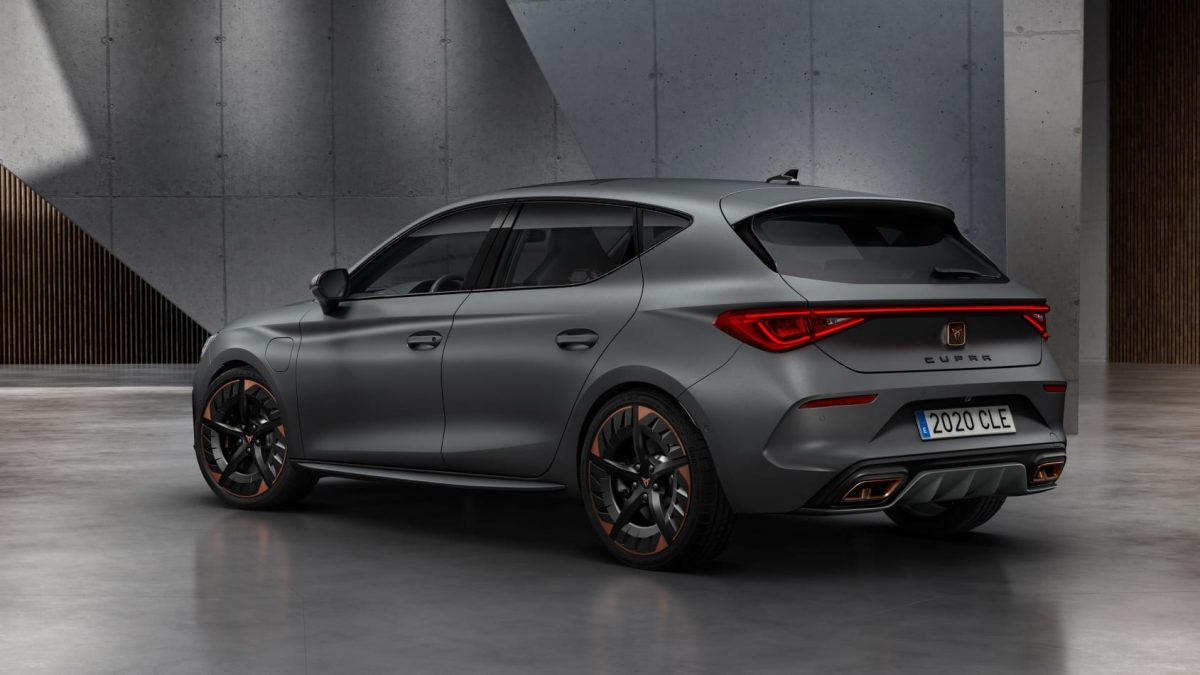 SEAT’s performance brand Cupra has unveiled its take on the all-new Leon, launching not just one, but four different models with varying outputs and drive systems. Combined with the Leon’s new chassis, design and interior, it’ll enter 2020 on the back of the previous Leon Cupra’s impressive 44,000 sales with a whole new arsenal of tricks ready to rival the new Civic Type R, Volkswagen Golf GTI and Ford Focus ST.

The first upgrade is the new bodyshell, which is 90mm longer than on the previous-generation Leon, and shaped somewhat differently with a more upright windscreen, longer bonnet and 50mm longer wheelbase. Its chassis is shared with the standard SEAT Leon (and other Volkswagen Group MQB products), but the Cupra sits lower on its larger wheel and tyre packages by 25mm and 20mm at the front and rear respectively, and with slightly wider tracks. The electronic power steering system has also been fettled, while the dynamic chassis control has been engineered to give the Cupra Leon a wider remit across the different driver modes, all of which are now more accessible through a new steering wheel-mounted mode switch.

The major driver for the variance between drive modes is the Cupra’s standard adaptive dampers, which now not only change depending on the selected mode, but also monitor the road surface and actively adjust the stiffness based on the road conditions. The brakes are also new, with four-piston Brembo calipers gripping 370mm front discs.

As with hot Leons of the past, Cupra is offering a range of different powertrains, including a new plug-in hybrid option for the first time. The entry Cupra Leon features a 242bhp 2-litre turbocharged four-cylinder that will also be seen in the new Golf GTI, while the Leon PHEV introduces a plug-in hybrid powertrain to Cupra that combines an electric motor and battery pack with a 1.4-litre turbocharged four-cylinder, again producing a 242bhp peak power figure. This powertrain is incidentally also shared with a hot Golf, this time the GTE. Both these powertrains power the front wheels via a dual-clutch transmission – a six-speed unit for the PHEV and a seven-speed unit for the other.

The two other powertrain options take things up a notch though, starting with a 297bhp version of the same 2-litre engine powering the front wheels through a seven-speed dual-clutch transmission and electronically controlled limited-slip differential. These three powertrain options are available in either five-door hatchback or estate form. Finally, topping the range is the estate-only 306bhp Cupra ST 4Drive, which sends its power to a Haldex all-wheel-drive system via another DSG ’box. Performance figures for this flagship model are rated at 4.8sec to 62mph, 0.1sec faster than the current model, while top speed is limited to 155mph. No range-wide performance or key weight figures have been released so far.

These two hotter engine variants might be familiar to you from the current Leon Cupra, but that’s no bad thing, as the current Leon’s strong EA888 engine and slick DSG ’box are, and always have been, close to the top of the class in terms of performance and usability.

What’s more dramatic is the Leon’s design inside and out. All models receive an aggressive new bumper set, bespoke colour options and plenty of copper-accented trim and badging to denote the Cupra status. Both 242bhp versions are fitted with 18-inch wheels as standard, while the higher-output models replace these with 19-inch units for an even tougher stance. The minimalist interior is shared with the standard Leon, but accessorised by yet more copper detailing, Alcantara trim on the seats and door cards and a bespoke steering wheel fitted with an engine start button and mode switch as mentioned above.

Tech has also improved, moving across to the new 10-inch floating infotainment display familiar to the standard Leon (and Golf), paired to a new digital driver’s display.

The new Cupra Leon is available for pre-order now, and will reach UK showrooms later this year. Final UK prices and specifications have yet to be announced, but we suspect the slight value edge that Leons have traditionally had over their hot VW Golf cousins will remain, and hopefully too their slightly more boisterous personalities.